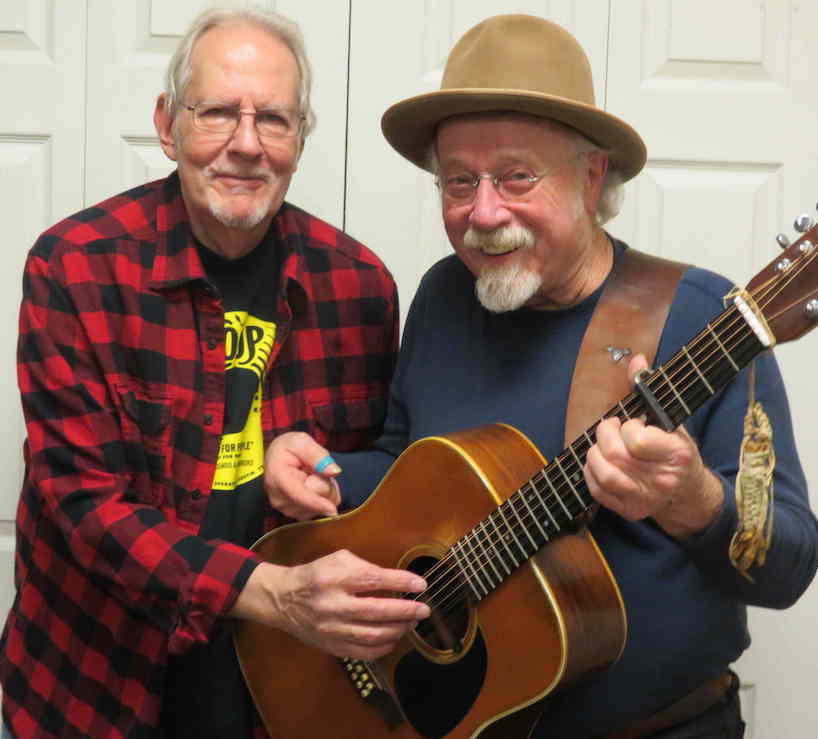 Thorne Dreyer's guest is Houston-based Western balladeer Bobby Bridger, who is also an author, playwright, painter, and historian. Most recently, Bridger is the producer of Indigenous Audiobooks. The first in the new series is The World We Used to Live In: Remembering the Powers of the Medicine Men, by leading Native American scholar Vine Deloria. The book is read by celebrated Cherokee actor Wes Studi (Dances with Wolves, The Last of the Mohicans, Geronimo). Bobby Bridger has recorded numerous albums and is the author of four books including A Ballad of the West, Buffalo Bill and Sitting Bull: Inventing the Wild West, and Where the Tall Grass Grows: Becoming Indigenous and the Mythological Legacy of the American West, and the epic theatrical trilogy, A Ballad of the West, in which Bobby portrayed his cousin, the legendary Mountain Man Jim Bridger. On Rag Radio, we discuss the new audio book and his other projects and Bobby sings two songs for us.Photo above: Thorne Dreyer, left, and Bobby Bridger. Photo by Roger Baker / Rag Radio. Rag Radio is produced in the studios of KOOP 91.7-FM, an all-volunteer, cooperatively-run, solar powered community radio station in Austin, Texas, in association with The Rag Blog and the New Journalism Project, a Texas 501(c)(3) nonprofit. It is streamed live on the Internet at KOOP.org and Radio Free America. The host and producer of Rag Radio, Thorne Dreyer, is a prominent Austin-based activist and writer who was a pioneer of the ’60s underground press movement. The show’s engineer and co-producer is Tracey Schulz and the staff photographer is Roger Baker; Suzy Shelor is Rag Radio associate; Alice Embree is guest host; and Glenn Smith is our political analyst. The syndicated show is broadcast (and streamed) live Fridays, 2-3 p.m. Central) on KOOP, and is later rebroadcast and streamed on WFTE-FM in Mt. Cobb and Scranton, PA., on Houston Pacifica's KPFT HD-3 90.1, by KKRN, 88.5-FM in Round Mountain, CA, and at WALHRadio.com in Wilmington, OH -- and as a featured podcast at Veterans Today. Learn more about Rag Radio here.